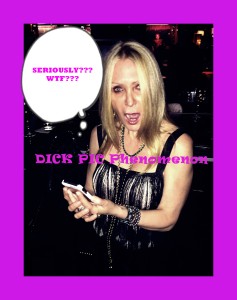 DICK PIC ? You just sent me a picture of your dick.  You actually took a DICK PIC Selfie.  Did you think that the DICK PIC Selfie would make me want you?  Will it somehow make you irresistible in my eyes?  Do you really think, after I have just met you, that if you send me a visual image of your manhood that somehow this is going to garner you a second date, and, on that second date, I will want to skip dinner and go straight for dessert?

Okay, I can only speak for the single world and be the voice of my single girlfriends, but recently I have been hearing a lot of rumblings about the ‘Oh-My-Gaaawd, this guy just sent me a picture of his dick.’  Internet dating has made ‘random-stranger-dating’ a new thing, and one of the consequences of this ‘it’s a new world’ dating phenomenon, is the ever increasing frequency of my friends receiving – DICK PICS.

Yeah I know, people have been sexting and texting and emailing sexy intimate shots for decades. So you might argue that the DICK PIC is not a new phenomenon at all.  I am not referring here to your long term lover who sends you a sexy shot, or a guy that you are dating and really into.  I am referring to someone that you just met or maybe even haven’t met, trying to lure you in with a penis picture.

Women know that men often make excuses about ‘thinking with the wrong head’  – like somehow their penis does have an actual brain, a brain that suffers from serious brain fog at times  –  and somehow this gives them a plausible excuse to explain ‘wrong doing’ or ‘stupid doing’ on their parts.  We also know that the male reproductive organ is so prized among our male counterparts that their ‘family jewels’ are also often given their own name,  and this named manhood sometimes has a unique personality apart from its owner. So I am guessing that this ‘pride of ownership’ must be part of the reason for the ‘sharing’ of a DICK PIC!

My friend Alyssa recently went out with a guy she met on Tinder. He was nice looking, educated, had a good career, so she was cautiously optimistic about the date.  Unfortunately, even though he seemed half way decent on paper, he lacked the ability to communicate at all, and Alyssa was so bored that she barely made it through the date.  Still, at the end of the dinner, he tried to sidle up to her in the sexiest way he could, cooing in her ear that he would love it if she came home with him.  She decided that ‘kind honesty’ was the best road to take, and told him she just didn’t feel a connection, but was happy that she met a new friend.   So in the morning, when she woke up and saw a text from him, she was a bit surprised: Surprise became stupefaction when the wordless text he sent was –  a DICK PIC.

Note to men: If we don’t like you, seeing a picture of your penis doesn’t make us want you, it actually makes us scream and run.  It makes us block your number.  It makes us want to change our number.  We are not going to get turned on and suddenly want you. Seeing a close up picture of your erect junk does not make us regret our decision.  It doesn’t work that way with women. It doesn’t turn us on, it turns us off!  We will think you are a disgusting idiot and likely tell you to F-Off!

I don’t know, boys will be boys, men will be men, and I guess we can’t stop them from thinking with ‘their wrong head’, but maybe we can teach them a lesson. If a guy sends a DICK PIC and you don’t respond, he feels like hasn’t lost anything for trying.  If you scream and tell him to screw off and block him, he is not offended; it’s kind of like, nothing ventured nothing gained.  I can’t imagine that this male DICK PIC strategy works very often, but I guess the remote possibility that it will somehow change your mind and make you want him, is a narrow margin that makes the sending of the picture worthwhile.

I guess it’s kind of like a hockey player trying to shoot a puck in from across the rink – the chances are slim he will score, but as long as there is a chance, it’s literally ‘worth the shot’.

So….If you receive a DICK PIC and you want to hurl, remember that the guy that is sending this picture is pretty proud of his manhood. He thinks it is so awesome and special, so sexy and alluring, so impressive and manly that you just can’t possibly resist…. ‘it’!

So instead of sending back an unladylike nasty F-Bomb, or a screaming text message, maybe the solution is to fight back and hit him where it hurts. Instead, think of sending back a stinging remark – one that might make him question his ‘pride of ownership’ so to speak –  or a sarcastic comeback, one that might actually make him doubt his ridiculous actions and hopefully deter him from engaging in future DICK PIC escapades. 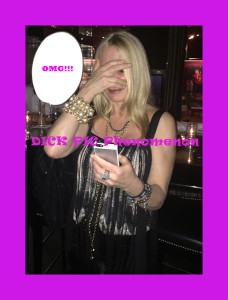 So, here’s my list of DICK PIC comebacks you may borrow when the need ARISES (every pun intended):

So…the Moral of this DICK PIC  story for women is…

Sometimes even when men are thinking with ‘both’ of their heads, their actions might result in an adverse reaction from you – so remember a sarcastic comeback or one that weakens and diminishes their DICK PIC self-perception, are far more victorious than a Fuck You!

And… the Moral of this DICK PIC story for men is…

Even if you are into a girl and she is into you, and you send her a sexty texty – thinking your male parts will be a sexy seduction tool – you had better pray that the relationship doesn’t hit the shit fan, because if it does….she now has a picture of your private parts, and when she is pissed and crying and mad as hell, do you really want DICK PIC revenge pictures forwarded to all her friends in her iPhone, or worse screen shot and posted to her social media sites for the world to see? (And God forbid, your mom is on her Facebook…God Forbid.) 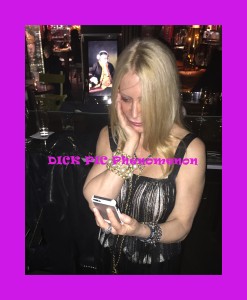 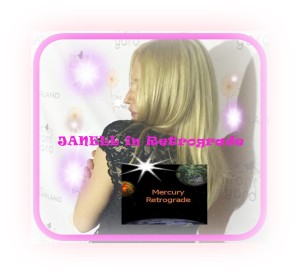 Janell in Retrograde
Retrograde...literally means, moving backward. The most feared retrograde, at…