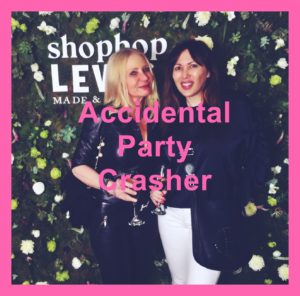 Do you remember the infamous party crashers—Michaele & Tareq Salahi—who, in 2009, ‘gate-crashed’ a White House State dinner for the Indian Prime Minister? The Virginian-socialite couple managed to not only enter a private event—uninvited, of course—but bypassed two secret service checkpoints, one which even required a photo ID. Their scandalous and brazen actions resulted in a Formal Investigation, and left a nation shocked and unsettled as to the efficacy of our national security.

The Secret Service eventually issued a statement saying they were embarrassed admitting that certain protocols had not been followed. You see, it was raining that night: so, in an effort to quickly expedite guests into the event, security protocols—like checking IDs—were overlooked, and it was surmised that the Salahis were admitted simply because… they looked like they belonged.

While sneaking into a black-tie dinner with the President seems unfathomable, ‘gate-crashing’ and ‘party crashers’ are more of a common thing in Hollywood. With a plethora of events going on in town 365 days of the year, there is no lack of people trying to get into events that they were not invited to.

As I have never wanted my five minutes of fame to be seen on TMZ as a party crasher, I hold out for actual invitations, hoping the universe will be kind to me and invite me to enough things so I don’t die of single-girl-boredom.

It all started with a delicious invite from a girlfriend of mine who works for SBE Entertainment Group. In case you don’t know who SBE are, they own a multitude of cool, high-end restaurants and hotels worldwide; basically, they are huge. I am always so grateful when my friend includes me in something they are doing, as I know that—not only will I have a blast—I will also enjoy quality food, high-end drinks, an upscale crowd— and most likely—a gift bag to take home. Basically, a winner-winner-chicken-dinner of a ‘free and fabulous’ night for a single-chick in Hollywood.

So, one Wednesday, when my SBE girlfriend sent me an email asking if I wanted to pop by Hyde on Thursday night, I emailed her back straight away saying I would love to come, and asked if she would mind if I brought a friend. My friend Carrie was in town from Seattle, so I thought it would be something fun for the two of us to do. Carrie, a busy mommy and wife, was more than happy to have a glamorous girls-night-out instead of the happy hour at Pizzeria Il Fico, which was our original plan.

February nights can be cold in Los Angeles, and on this night, the temperature was going to be dipping down into the low 40s. Okay, not Canada cold, not -40 below Manitoba Celsius cold, but cold for LA. Carrie, who had not anticipated attending a swank soiree when she left Seattle for LA, was concerned that she hadn’t her sexy-LA-attire in tow. I told her, as it was fucking-freezing outside, that I would wear jeans or pants or something, so not to worry.

Girls, we worry about everything, why????…. because we are girls!

I decided to drag out my leather pants and leather top, hoping to pull off my sexy-rocker-look for our sure-to-be fab affair; not super fancy, but cool and sexy. Carrie arrived at my place, I jumped in her car, and we chatted like schoolgirls all the way to Sunset Boulevard.

You know, I have driven past Hyde a thousand times, I even had my birthday party at Hyde a couple of years ago. Yet, we were so consumed with girl-chatter that we almost drove straight past the restaurant, turning just in the nick of time on the street to the left side of Hyde. There was a ‘special event’ parking valet about halfway up the hill, so we pulled up and handed the valet our keys.

“Janell Martin plus one” I proudly stated to the check-in girl. She scanned the list and said, “I don’t see your name on the list. Whose list are you on?” I said: “Lena’s list”, and she checked again with a puzzled look on her face. As Carrie and I stood outside freezing, I started to get annoyed and said “Lena, she works for the owner of SBE, this is her event, let me look through my phone to show you my invite from her.” As I started to look for my email confirmation, the check-in guy next to her gave us passes to go in and said to have fun.

I had been momentarily annoyed and felt somewhat embarrassed that my name was not on this list as it was supposed to be, but shit, glitches happen and ‘shit-happens’, so I was just grateful that I was finally walking into the event, grabbing a glass of champagne on the way.

We walked up to the red carpet, which was adorned with a large ‘shopbop LEVIS’s’ logo mixed in with the flowered wall background. We had our pictures taken and gave our names to the photographer. Then we took the passes they had handed us, stood in-line— grabbing nibbles and champagne as the waiters wafted in and out of the room—while we took our turn waiting to order our free custom LEVIS Jean Jackets.

After we had secured our ‘jacket-swag’, we explored the venue—most of which was set outside, on this cold winter night—so we grabbed another glass of champagne and made our way to cuddle up to one of the heaters, as much as we could, without looking like freaks.

In LA, you never know what an invite is like, so you go with the flow….

As Carrie and I stood there shivering and chatting, it dawned on me that I hadn’t seen my friend Lena at all that night. I also didn’t remember there being a backyard the last time I was at Hyde, but Carrie said the owner was famous for always switching things up, so we just reasoned that this backyard expansion was a recent acquisition to the property or something we just hadn’t been privy to in the past. After all, it was a PRIVATE EVENT, in a private location, which sort of did make sense.

The crowd was very twenty-something, wearing a mix of cool-retro-hip ‘I bought this at Wasteland second hand look’, mixed with high-end designer pieces. You know, that look like… ‘I am not trying too hard, but I still know what fucking designer is hot right now, and I am a somebody look’. Truthfully, we sort of stood out a bit from the rest of the crowd, but we just went with the flow. I was surprised that the food chosen that night came from a food truck, but we made the best out of the gourmet mac-n-cheese, grilled cheese sandwiches and tater-tots. Damn, even the food was retro-cool.

Although, it was not the event I had anticipated in my mind when I was invited—caviar, champagne, and situated inside with actual heat—we had a fun time, caught up, and got in line for the valet before the departing crowds became a long miserable mob of party-people freezing to death as the 4 valet guys tried to find a hundred cars all at once. (side note, LA peeps will SO identify with this !)

As we were leaving, I asked the valet who had retrieved our car if this was the Hyde party. And he said, I think so, and things are really going off down there too. I kind of wondered at the time if we should walk down to the restaurant and check to see if we had maybe missed something, but… it was late, we were tired, and our car had finally arrived.

Exhausted and cold, I collapsed into bed—not before heating up some risotto from my fridge as I was still starving, tater-tots aside—and fell asleep. In the middle of the night I woke up, and as the evening started to rewind in my head as I was making my way into my bathroom to pee, it dawned on me: the valet said that it was going off at Hyde… could I have been at the wrong party?

So, the next morning I went onto my Instagram and checked out my friend Lena’s feed and saw a big picture of the sign for HYDE and felt like something was off. So, I emailed her, and of course, she was at the party, at HYDE, inside, with the great food, and the great drinks, and the cool people and the great gift bag, and the warm air heated by an actual heating system… and I, I had accidentally attended a party directly behind Hyde.

I was embarrassed and felt terrible that I had RSVP’d to attend an event and was a no-show, but worse than that, I realized that I was a PARTY CRASHER!!! I was an accidental Party Crasher, but a party crasher all the same.

I guess, we must have had the look like ‘we belonged’—just as did the Salahis—the only difference is, our party crasher escapade was a mere dumb-blonde and tired-brunette move.

So, the moral of this Party Crasher story is….

But, hey at least I got a cute new Levi’s jean jacket! 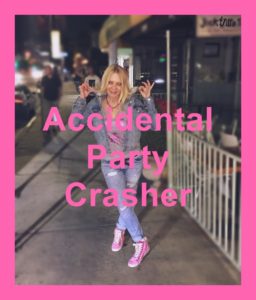 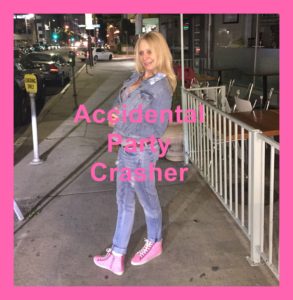 Below are some reviews of my book, Where the Dogs Go… Available online at Amazon or Barnes and Nobles