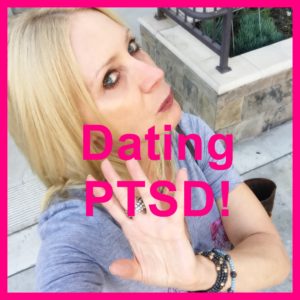 DATING PTSD – And why its RAMPANT in LOS ANGELES!

Have you ever experienced what I call “dating PTSD”? Are you wondering what my whacky brain has come up with now, or do you totally get the direction I am heading in?

PTSD is an acronym for Post-Traumatic Stress Disorder. Individuals who suffer from major traumatic incidences often develop PTSD, and sometimes, the traumatic memories can be triggered when situations occur where the individual is reminded of the past traumatic event. In reality, the mere fact of living in a city like Los Angeles likely has multiple instances of PTSD flashbacks on a daily basis, as life can be difficult in this city. But, for this story’s sake, I am only going to reference dating PTSD, because I believe that single people everywhere are ALL suffering from a form of dating PTSD on some level.

What the hell is dating PTSD?

Let’s face it: If you are still single, and you are actively looking for a partner to spend your life with, you likely have had to kiss your share of frogs. Kissing frogs has become an accepted rite of passage in modern life, making dating numerous potential partners in an effort to find true love, socially acceptable.   It is kind of like the universe is giving you permission to kiss as many frogs as you need to in order to find your handsome prince. Because let’s face it—everyone, at the end of the day, still wants to end up living in their own version of a fairytale-destined-to-be-together romance of a relationship, where chivalry and passion will keep you in love when the going gets tough.

The only problem with this scenario is sometimes, some of the frogs we end up kissing, leave us with massive scars and wounds and traumatic emotional injuries that I believe result in dating PTSD. Sometimes when these distressing wounds from past relationships reappear or are even gently triggered, we run from a person and a potential relationship before we even give the person a fair shake.

I am betting you are all thinking now, hmm, maybe she does have a point here. I can only use my personal examples of my very own dating PTSD and point them out to you, which will hopefully make you ponder your own life and reconsider the way you are looking at a potential contender. 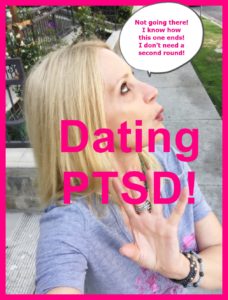 Okay, at first you are excited that a younger, hot guy is besotted with you. Just when you decide that you might kiss this young tadpole and let him hang out with you on your lily pad, you suddenly have a flashback to when you dabbled your little-webbed toes into this pond before. Suddenly, you remember your past ‘younger cute guy’, who wondered what the small dimple in your thigh was, so you explained that regardless of how much you exercise, you have a few dimples of cellulite here and there. So, when he remarked that he had never seen that before, except on his mother’s and grandmother’s legs—him now admitting that he had only ever dated young model types—you and your cellulite dimples felt humiliated and insecure. You were therefore so worried about him noticing any more body imperfections that you pushed him off your lily pad and back into the pond before he had a chance to discover any of your other flaws.

So, this past traumatic moment—when it becomes a flashback after you meet another ‘younger cute guy’ who wants to take you out—results in dating PTSD, and you don’t even give your new suiter a chance.

Well, then there is the opposite… Older Dude dating PTSD

So, a handsome distinguished ‘older dude’ is checking you out at the gym. Finally, he musters up the courage to speak to you and inevitably asks you out. Okay, so he might be a little older than a guy you normally would date, but he is established, dapper, and drives a nice car. But, just when you rationalize the age difference knowing that you will be picked up in a Bentley and will have a fabulous dinner at Spago, your brain suddenly has a traumatic flashback to the previous ‘older dude’ you dated before. Suddenly you remember the waiter asking if you were his daughter, and then you flash back to having to read the menu to him when he forgot his glasses at home, and if that wasn’t enough, then you remember his long saggy balls and you literally gag on your own repressed thoughts.

So, without even giving this ‘older dude’ a chance, you call it off (or you might just wait until after the dinner at Spago, because… it is, after all, SPAGO!) – the result, ‘Older Dude’ dating PTSD

Just think about it, I bet you have tons of dating PTSD examples from your own life. Dating PTSD happens a lot, and when we meet someone who has a characteristic from someone in our painful past, sometimes we just PASS on this person before giving them a chance.

Here are some more examples, in case you are still perplexed, of Dating PTSD!

So, you see, with the prevalence of dating PTSD definitely on the rise, especially with the preponderance of the acceptance of serial-societal-frog-kissing, the dating pool is dwindling before our very eyes. Why?!? Because when we fish in the dating pool, and when we catch a fish that resembles one that previously left a bad taste in our mouth, instead of maybe giving that fish a chance—and perhaps baking it instead of frying it—we throw it back because the PTSD memory is so strong, that we don’t want to chance ever tasting that bad fish again.

THE Result! Everyone is still single!!! 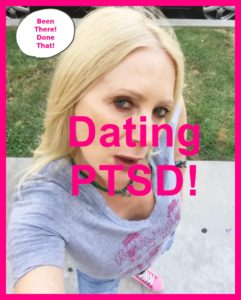 So, the moral of this dating PTSD story is:

Please check out my book, Where the Dogs Go available at Amazon or Barnes and Nobles! For Dog Lovers EVERYWHERE! WOOF!! 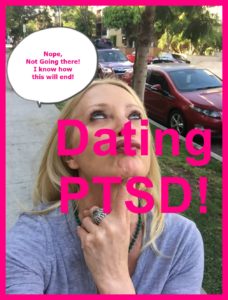