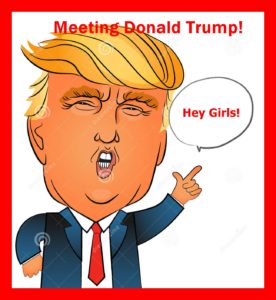 Are you wondering what this has to do with meeting Donald Trump? Well, let me tell you a tale from the crypt which is… my life.

Flashback to about 15 years ago….

My girlfriend, who had just come off of starring in not one, but two, major TV series, had been invited to attend the Miami Boat Show as a celebrity guest. For those of who don’t know, the Miami Boat Show is a luxurious event where prospective buyers come and check out all the hottest boats of the year. I am not talking about fishing boats; rather these boats are small, medium, large and massive sized private yachts. It’s a ‘boat’ show for those who live the lifestyle of the rich and famous.

My friend’s husband decided to stay home and take care of their young son, and I was the lucky ‘chosen one’ to attend as her plus one. After we flew to Miami, first class I will add, and checked into our luxurious hotel, we hit the spa and crashed. We spent the entire next day at the boat show. It was an exhausting day with every ‘Tom, Dick and Harry’ lining up to meet and shake hands with my gorgeous and famous friend.

That evening, my ex-boyfriend, who lives in Florida, had arranged to take my friend and I out to dinner at a swanky hotspot since his teenage son was dying to meet my famous friend. As we were getting ready to head out, the front desk of the hotel called our room and informed us that Ocean Drive Magazine was hosting a private cocktail party in the hotel, and when they found out my girlfriend was staying in the hotel, an invitation had been extended to us to attend.

You know me, I will never turn down a party invite. I love everything about private events: passed hors- d’oeuvres, champagne, gift bags, and most importantly, meeting interesting people that are trapped in the same room as you for two hours, giving you the chance to actually tap on their shoulders and make their acquaintance. Events make the playing field of life even, so when you are invited to a ‘private event’, your chances of meeting people are greatly magnified as people are definitely more open to being approached.

My friend and I sauntered around the room, sipping our champagne, giggling and enjoying each other’s company when suddenly, my friend was the one who had someone tapping on her shoulder. We stopped our discourse, and we both turned around to discover that the shoulder tapper was none other than Donald Trump.

Oh YEAH it was Donald Trump! 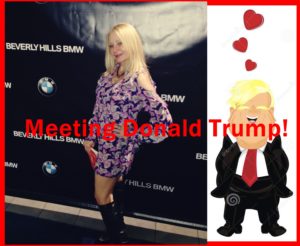 At this time Donald Trump was just that, Donald Trump… or ‘The Donald’; a middle-aged rich dude, with a bad comb-over, and a protruding belly, who was ogling my friend. The three of us chatted, he was charming yet abrasive, and he could not keep his eyes from scanning my friend’s body as we conversed. I mean, I can’t blame him for that, she was and IS drop dead gorgeous.

He started to tell us about his casino in Atlanta, and about his buildings in New York, finally finishing off his bragging by regaling us with the details of his magnificent estate in Florida called Mar-a- Lago. After he had us hanging on his words, describing in detail the opulence of the estate, it didn’t take long for him to invite us to extend our trip and spend some time with him at Mar-a-Lago.

I think my eyes almost popped out of my head, and I gave my friend that look like, ‘Yeah, let’s go.’ She was polite, but declined gracefully, explaining that she needed to return home to her family. He kept trying, not one to give up easily, but as I looked at my watch I realized that we were actually running late for our dinner date.

I looked up at Donald Trump and said, I am sorry Donald (yeah, we were already on a first name basis with the dude), but we need to go, we are late for a dinner engagement. He tried to charm us, getting us to stay, but I had texted my ex and they were at the restaurant waiting, so I blurted out, ‘Gosh, they are there waiting, we are already 30 minutes late’. We excused ourselves, but not before thanking him for his ‘generous offer.’

On the cab ride to the restaurant, I asked my friend why she didn’t want to go and hang out at Mar-a-Lago, since it sounded like a fun adventure to me. And she replied, ‘Yeah Janell, you might think it sound fun but umm, I am pretty sure that offer came with ‘strings attached.’ I think I muttered something like ‘EWE’ and we had a laugh while getting out at the restaurant.

Okay, so her being hit on by Donald Trump was a good conversation starter and made for our embarrassingly late arrival somewhat humorously excusable. My ex’s teenage son was gobsmacked to be in my friends’ presence. We all had a fun time, and at the end of the night, my ex-boyfriend gave me a belated birthday gift, a diamond and platinum necklace.

On the cab ride back to the hotel, my friend was like, ‘I don’t know how you do it Janell. Your ex just gave you a diamond and platinum necklace, your EX.’ Truthfully, I was a bit taken aback by his generosity, but you know what they say, never look a gift horse in the mouth!

It was a whirlwind two-day adventure to Miami, but looking back, now that Donald Trump has ‘somehow’ become the President of the United States, should we have gone to Mar-a-Logo and got to know him better? 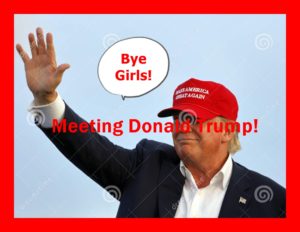 I mean, let’s look at the positive aspects of having taken Donald Trump up on his offer….

Dang, since we both are ‘good girls’ with morals, the last two would never be applicable for us, and the thought of either of us running the country frankly scares me almost as much as having Donald Trump as the President terrifies me.

So that being said, I am glad we said no to his offer, but it does make for a good story now.

PS… Check out my book for dog lovers called ‘Where the Dogs Go’ available on Amazon!

Here is a link to a recent book signing in Beverly Hills! Enjoy