Falling into a New Decade, and how Not to Fuck it up… 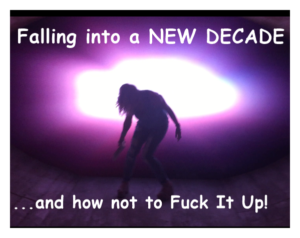 The start of a New Year always brings renewed hope and expectations, a fresh start, so to speak. People are busy making lists of New Year’s Resolutions, trying to find ways to improve their lives and correct their errors from the past year. This year, as we enter a new and ominous decade, there is a heavier than normal anticipation in the air of the seemingly endless possibilities that this new decade might bring.

It’s like ‘Wow, it’s 2020, all the shit that happened in the last decade is behind us, and we have a chance to do this decade right’ kind of mentality. A renewed sense of optimism is in the air. But, not far behind optimism, the polar opposite, pessimism is lurking closely behind.

What? A new decade breeds pessimism?

Yes, I hate to be a ‘Debbie Downer’ but, yeah, pessimism is sneaking as close as it can get to optimism. So, at the first sign of the optimist losing its enthusiasm for a new decade, or when the optimist’s confidences are challenged, pessimism can creep in challenging optimism. This will often derail even the strongest of optimists turning them to pessimists before January 2nd.

So, how do we try to stay positive, focused, and optimistic in a new decade when pitfalls and landmines are literally coming at us at light speed, trying to derail us off of our path?

Simple, you need to NOT fuck up falling into the Abyss of a New Decade!

The first way to not Fuck Up the New Decade is…

Stop making New Years Resolutions. ‘This year I’ll work out more, drink less, eat healthily, save money, give to the needy, lose weight, donate to charity, stop smoking, stop heroine… etc.’ Whatever your poison, do you really think that making a resolution to stop it will, well, stop it? If that had worked, you’d be a saint right now, and Pope Francis would have blessed you in person at the Vatican. Or, the Queen of England might have knighted you, and you’d be calling yourself ‘Sir’ as in ‘Sir Elton John’.

New Year’s Resolutions don’t work, I think I’ve broken mine every year by noon on January 2nd. The breaking of New Year’s Resolutions is pessimism’s first inroad on ruining your sunny outlook on your brave new year, or as in the case of this year, decade. It’s like, you’ve already screwed up and broken your promise to the one person who matters the most, yourself. So, why bother now that you’ve already managed to derail what you feel you need to do to live your best life.

Setting New Years Resolutions only sets you up to fail. Yeah, you may start again when it’s the Chinese New Year, but then, fail again. Or, maybe over Yom Kippur, you’ll give it that old ‘college’ try, only to well, fail again. So, instead of making promises that you break, make goals that you want to attain and try moving in that direction.

Let me give you an example. You know that you eat too much sugar, so instead of giving up all sugar starting January 1st, 2020, you decide to make that a goal, not a resolution. When you make something a goal, it means it’s a work in progress, not a fait accompli. So, if one day you eat too much sugar, and you are aware of the fact, you can try and correct it the next day and balance yourself out. Setting goals instead of resolutions means that you are making conscious decisions about bettering your life. Still, you are not putting unrealistic restrictions on yourself that you will never be able to maintain. Make sense?

The second way to not Fuck Up the New Decade is, to…

Count your goddamn blessings. Seriously. Instead of worrying about what you don’t have, celebrate all that you do have. Whenever I feel down on myself, or where I am in my life, I watch the news, and I am quickly reminded of how lucky I am. Life isn’t always easy, no one said it would be. But, when you have the power to make things better and work towards your goals, it means that truthfully, you are more blessed than many people out there. You already have an advantage; you are still in a position to be able to do something.

I was walking on Robertson Boulevard yesterday doing some ‘post-holiday’ shopping, when I spotted a homeless person who was living in a tent about a block and a half from my home. His little shanty shack of a tent reeked of urine, and I could hear him muttering to himself as I walked by. As I scurried by as quickly as I could, with my new pink bubblegum colored coat I had just gotten on sale, I didn’t think of all of the things I didn’t have, instead, I was grateful to be me. 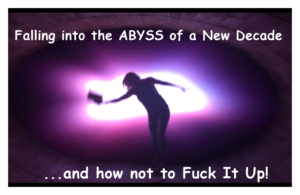 And my last way to not FUCK UP the New Decade is, to…

Stop comparing yourself to other people. Look in the mirror and see you, and where you want to go, and what you want to do. The minute you compare ANYTHING about your success, your happiness, your possessions, your looks, or YOU to anyone or anything else, you are fucking up your chance of happiness.

Your happiness is only dependent on you, and no one else. Nothing or no one will bring you what you need in life. You are the one that delivers everything to you, so love you, and stop comparing yourselves to others.

And that includes Social Media…

Stop obsessing over other people’s social media posts. A post is just a post, it doesn’t mean they are happy, fulfilled, or even… telling the truth. Social media is a platform to promote your projects, but the minute you start looking at other people’s lives and feel like your life is letting you down is the exact moment that pessimism has won his war and your chance of loving your life, has gone down the toilet.

On that note, I wish everyone a fantastic year, and a fabulous decade ahead!

And the moral of this Falling into a New Decade and How not to Fuck it up story is….