When Alice fell through the looking glass we as readers fell into the world of imagination, one where only the mind can travel via a story so far removed from anything remotely plausible that the escape is a delicious retreat from life. However, fiction aside, if the Mad Hatter were to suddenly come to life and land on Hollywood boulevard, he would most likely get lost in the crowd of the obscure who assemble there and it would take one hell of a magic spell to find him and send him back to Wonderland.

Landing in Los Angeles, I truly have felt over the last 15 plus years a little bit like Alice in Wonderland, or more appropriately Janell-ice in Wonderland. How did I fall into the world of Hollywood you ask? How did the Canadian farm girl turned first grade teacher end up in La La Land? The heart… I followed my stupid heart: I met an American man, fell in love with the American man, applied for a green card so I could move to America and be with my American man, that kind of stupid heart following plan.  So of course,  three months after  my American man realized that my impending move to the United States might ultimately put too much pressure on him for my so called ‘happiness and well-being’ and three months after I had subsequently dumped his ass,  my shiny little green card came in the mail. In the mail with an expiration date – an expiration date of entry into the United States or permanent nullification of the green card never to be activated again kind of date.

Decisions…dilemmas…choices…what to do? When my one girlfriend who lived in Los Angeles, offered me the opportunity to couch surf with her for a while, and with the support of my family and friends, I decided to give this green card thing a trial run; worst case, I figured I would go back home to Canada, not with my tail between my legs, but with stories to regale for years to come. After all, it’s how you look at your choices and decisions, not the results that count.

A life packed into two suitcases and a box, cherished possession’s given away or stored, Janell-ice fell through the looking glass and landed at girlfriend’s apartment in Beverly Hills. There is an expression that there are no accidents in life, I have to call bullshit on that. There are plenty of accidents; it’s how you come out of the accident that counts. And my life in Los Angeles has been chocked full of plenty of accidents and choices made, lessons learned, doors opened and doors closed, opportunities taken and opportunities lost, but through them all I have and am surviving in this crazy town.

This town…  so somehow  the move to ‘tinsel town’  resulted in a massive career the leap from being a first grade French teacher to working as a Celebrity Personal Assistant to the rich and famous in Hollywood. How did the little French teacher stumble into this world you ask?  Simple – by taking a chance on door number two. Instead of sticking to the familiar and taking a teaching job once my American teaching credentials’ kicked in, I chose the option behind door number two, which ironically and magically appeared in the same day as the offer of a teaching position –  that being  a job offer as a Celebrity Personal Assistant.  After all, I reasoned, what is an adventure if you take the same path?

Doors opened, choices made, and my life about to change drastically. When I fell through the looking glass and into this world, I had no idea what was going to happen, what I would learn, who I would meet, and how I would grow.  But with a pedigree of experience working with a large variety of Hollywood elite – and simultaneous with the life experiences of dealing with boys pretending to be men, making good girlfriends and weeding out the bad, finding a purpose to party, dealing with drama and the craziness of life in general in LA ‘Looney’ Land, the result is that I am still alive and kicking, a bit bruised but hell, bruises heal.

Magic spells aside, I haven’t as yet gotten lost for good on Hollywood Boulevard.   And after almost a decade of working as a Celebrity Personal Assistant, wonderland magically opened a new door for me and I found a great, stable job outside of Entertainment. I am now in a ‘saner’ environment thus able to comment and poke fun at my life so far.  I can only hope that my view of how I see life through the looking glass and my tips to survive this upside down topsy-turvey- town might help you, inspire you, or at least give you  a good laugh.  Because through it all, being able to laugh at myself has been the best survival tip of all! 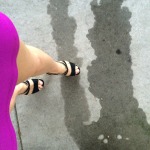 …Falling through the Looking Glass….Hollywood Style!