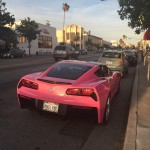 Los Angeles, you crack me up….I knew I had fallen into Wonderland when the I  landed in LA, but sometimes I just can’t get past the crazy extremes that become the norm here, or the weird stuff that becomes the norm, or the surreal life that becomes…Reality….

The nightlife playground known as the ‘club scene’ in LA becomes an opulent mix of girls clad in barely there dresses and men trying to impress the almost naked girls enticing them into their ‘club’ lairs with bottle service of the best champagnes and spirits.  Let’s just say it doesn’t take long to acquire a taste for Dom Perignon and Cristal – a bit different than the ‘two buck chuck’ I was used to drinking back in Canada…

One afternoon, my friends and I were invited to a ‘pamper pool party’ at a home in Beverly Park by a WEALTHY MAN’s who we had met the night before at one of the LA nightclub playgrounds.  Beverly Park is a private, gated community whose residences are exclusively A-list celebrities and the extreme wealthy, with most homes over 10,000 square feet sitting on several acres of land; so we knew we had most likely hit the jackpot of invitations for our Saturday afternoon adventure.

We were all excited about the ‘pamper pool  party’ as we had never been to one before, and as we were not sure what it would entail we decided that the ‘pool’ part of the invite meant pool attire.  So dressed in our sexiest bikinis, cover-ups and slides   we rolled up in my friend’s SUV excited for the afternoon…pamper, pool, and party…three magical words as far as we were concerned.

The Beverly Park security guard waved us through the massive gates once we showed him our ID’s that matched the names on WEALTHY MAN’s guest list, and we wound our way up the hill through the magnificent estates until we came to the top where WEALTHY MAN lived.  We were greeted by his house man who escorted us out into his backyard and told us to ‘amuse ourselves’.  WEALTHY MAN had turned his backyard into a mini princess paradise, including:  Mani and Pedi stations, massage tables, and multiple food stations with everything from kobi burgers, seafood bar, salads, caviar and multiple desserts.

As a DJ spun all afternoon, we ate, drank champagne, danced, swam and indulged in everything decadent that we could get our fingers on.  There were likely another 25 girls that he had invited to attend, and alas only a small handful of men; we definitely were there for the viewing pleasure of the male’s in attendance .  But truthfully, we didn’t give a crap –even though the woman’s movement was being set back a couple of decades   – because we were being spoiled rotten.   After six hours we rolled out with our freshly painted fingers and toes, relaxed muscles from the massages and champagne, skin slightly bronzed and bellies happy and full.  A perfect afternoon – a treat! We left making sure to thank WEALTHY MAN for his hospitality, and prayed we would be invited back!

On the way down the hill back into reality, one of the girls in the back of the SUV said…. “So did anyone try the caviar?”  We all nodded and said, yes of course, we had all tried the caviar.  Then she said “Like ….wasn’t that like… the worst caviar you have ever had?” The next few minutes we all bantered about trying to decide WHAT was wrong with the caviar?  We concluded that it wasn’t Beluga, or even Osetra, rather most likely some cheap caviar  bought at Costco, which lead to the ‘maybe the beef wasn’t really Kobe’ discussion  and so on.

And then one of my friends who was in the back peeped up and said the most hilarious thing… “Girls, if I was back in Texas now, I would be leaving a barbecue and all I would be saying was….Damn, those wings were great!” We all started to laugh and maybe for a moment felt somewhat ashamed for having complained about, well, let’s face it…Caviar…We complained about Caviar.

I was reminded of my roots that day, and how lucky I was to be living in a city like Los Angeles and experiencing all of the opulence and excess it can afford. But the reality is landing in Los Angeles, Hollywood, and Beverly Hills forever changes your perception of reality…you are exposed to things that most people only dream of.  And I have to say, that my palate has definitely become somewhat refined since living here.

As much as I detest snobbism, reality does bite, but the sting is less painful when you are chasing it down with a glass of Cristal and a caviar nibble. 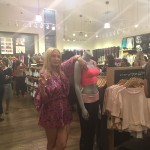 You can’t judge a boy by his car….. (Beverly Hills and its car obsessed life) 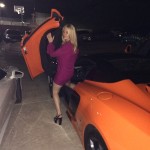 Songs have been written about LA and cars  ‘LA is a great big freeway’, about LA and not having cars ‘Nobody walks in LA’, and when you picture southern California and Los Angeles most people polled (I polled three, what the hell) picture a convertible, sand and the beach. Suffice it to say Los Angeles is a car culture, because getting anywhere without one is really difficult; even though Uber makes life so much easier now, I wouldn’t want to have to Uber to my, well, entire life.

The first car I bought when I moved here, and which I drove ‘til its death, was a cute little Honda del Sol.  The practical Canadian bought a practical reliable car that was good on gas, low maintenance, and what I thought to be at the time ‘cute.’  News flash…a Honda del Sol isn’t cute to most people in Los Angeles, and when it is ten years old and banged up, can actually get one followed by cops thinking you might be some bad ass from a bad neighborhood until they manage to get close enough to you to see the blonde hair, oversized sunglasses, and Louis Vuitton bag in the front passenger seat and decide you are likely not needing a pull over.

The car culture of Los Angeles began to amaze me, and I started to notice that my little del Sol definitely stood out as ‘unique’ amongst the ‘Mercedes-Ferrari-Maseradi- Lamborghini-Porsche-Range-Rover- culture that I was becoming a part of.  I was living in a car obsessed culture and basically I was driving a go-cart. You learn a lot about people by the car they drive, and here are my hard life learned Beverly Hills/LA ‘car-faxs’: 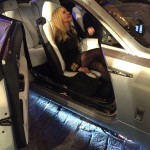 Hollywood Stars are not only in the movies, Bentley’s come equipped with them on the ceiling….Gotta luv it!

Well at the end of the day, my little Honda del Sol which never got me any guy attention (okay it did, but not the type of guy I wanted), ran great for ten years, cost me nothing to drive, was reliable, easy to park, and in my mind ‘sporty’, was an overall great investment. Moral of the story is…I now drive a BMW. 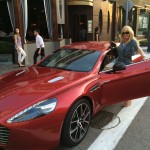 Testing out the new Aston Martin…gotta hope to  roll like everyone else in this hood!

Sometimes I miss this little go-cart…..and the baby…Canoli, will be missed forever….