My Night in a Lesbian Bar

My night in a Lesbian Bar… 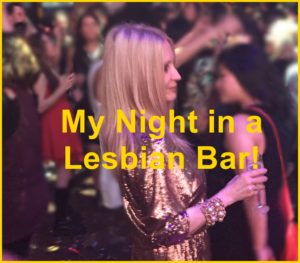 Los Angeles is a city full of diversity, which is one of the reasons why I love it. On any given day you could have Ethiopian food for lunch, go see a foreign film in the afternoon, take a Zumba class before you head out to a Persian restaurant dinner, only to end up at any number of nightclubs that LA has to offer: rocker bars, hipster bars, gay bars… well, you get the picture.

One night, I was out at an event at the House of Blues on Sunset Boulevard (which sadly, is no longer there).  An exceptionally thin, sickly looking man came up to me and hugged me as if he knew me. I pulled back and looked at him in shock. Then, I think my jaw dropped to the floor, as I suddenly recognized him to be one of my ex-boyfriends.  My ex-boyfriend my friends had dubbed with the nickname Bad-Steven, because, well, he was kind of a bad boy. When I had known Bad-Steven, he was a good-looking, fit, surfer type of a guy. The man who stood before me looked so frail, the first thought that came into my mind was, oh no, he has AIDS.  I think he could tell by the look on my face that I noticed his dramatic change in appearance, and he went on to tell me that he was ‘recovering’ from stage 5 testicular cancer.  My heart melted at that moment for him, we caught up, and I reassured him that he would be okay before I left the event and headed home.

Life altering moments like this remind us of the true fragility of life, and what a gift life is, one never to be taken for granted. After running into him, Bad-Steven was on my mind over the next few days. I was somewhat haunted by our brief encounter, and hoped he would recover.  A week later, I was watching the Lakers game with my friend Pete at one of my favorite Mexican restaurants, El Torito Cantina. When the game was almost over, my phone rang, and I saw Bad-Steven’s name come across my caller ID.  I picked it up, happy to hear from him.

He told me that it was nice seeing me again and that I had boosted his spirits and he wondered if I would meet up with him for a drink at the end of the game.  I told him I was with Pete, and that we would come and meet him.  He said he wanted to go somewhere near his home, and he chose a club in walking distance from his house.

Pete was not impressed, as he was not a fan of Bad-Steven’s, but as I explained to Pete that Bad-Steven’s chance of survival wasn’t great, so we really needed to go out of our way to try and cheer him up.

Yeah, Janell, so what does this have to do with a Lesbian Bar? Hold on, I’m getting to that, I just need to set the stage so you understand the whole picture.

Pete and I found street parking and walked up to the bar Bad-Steven had chosen. It was a Wednesday night, so I didn’t anticipate any ‘doorman issues’ or ‘list’ issues when we arrived, and it was still on the early side in terms of ‘club-bar action’. The doorman looked at us, and I smiled at him, and he said: “are you both sensitive to women’s issues?” Okay, I have been asked for my ID, or if I am on the list, but I have never been asked such a bizarre question from a doorman. Pete and I were puzzled, but said we were, shaking our heads as we entered.

When we walked into the club and looked around, I started to notice that the only patrons in sight were… women.  I looked at Pete and I said: “Pete, I think it’s Lesbian night, look around, I think we are in a Lesbian bar, maybe we should leave?” Pete, on the other hand, was excited at the prospect. Just then, in walked Bad-Steven.  I quickly explained to him that we had crashed Lesbian night at the Bar, and his reaction was ‘Oh Lesbian Night, GREAT!’

Alone, in the Lesbian Club…

Okay, so Pete took off in one direction, and Bad-Steven the other.  I hung out at the bar by myself, until I got a glimpse of Pete chatting up some girl. I went up to him, and pulled him aside for a second, querying him as to why he had abandoned me. He was like “you are ruining my game.”  I was stunned and said, “Game, what Game, it’s a lesbian bar!” Pete went on to tell me that some lesbian girls are bisexual, and he was certain by the end of the night that he would find a bisexual girl to go home with him.  Good Lord!

Joining the Lesbian Bar Party… why the hell not? 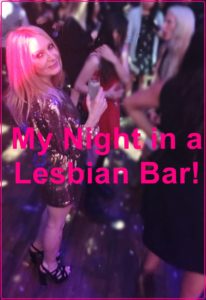 Okay, so I got a drink and started to chat with two girls at the bar, who were really cute and sweet. They suggested that we dance. We headed out to the dance floor and danced for quite some time.  Then they introduced me to a few of their friends who had a table. I ended up hanging out with them, splitting some appetizers and dancing with them too. I was having a blast! I was the straight girl playing the part of a lesbian newcomer.

Later, I decided to venture out on my own, leaving my new pack of friends to explore some more. A woman stopped me, a bit older, and we engaged in a conversation. She was a music manager and managed big musicians.  I really enjoyed talking with her, and when I finally excused myself to go and find my ‘new friends’ she said: “will you be back next week, I’d really like to get to know you better.” I gushed and blushed and told her that “of course, I would be back”.

Shit, it hit me, I was flirting with this woman, however innocent on my part, trying to amuse myself until Pete and Bad-Steven were ready to leave. I… felt… terrible. I felt horrible.  I felt like a con artist.  I was playing a part, and obviously, playing it a little too well.  Let’s just say, that being the ‘new girl’ at an all-girl-bar, definitely puts you in the spotlight of attention. All night long, I had been the queen bee of my new haunt, being approached and hit on by tons of girls. It was exhilarating.  I felt like… a celebrity in my own silly skin.  I was the new girl in town, the ‘It girl’ of the moment, and I actually was relishing in all of the attention. Hey, at the end of the day does it matter who thinks you are hot, or pretty? Validation is validation damn it!

But, realizing that I might inadvertently hurt someone’s feelings, especially when the music manager was hoping to ‘see me again’, I realized that it was time for me to go. I had been playing a part all night, and as fun as it was to pretend to be ‘one of the girls’, so to speak, I certainly didn’t want to lead anyone on or hurt anyone’s feelings.

I finally managed to track down Bad-Steven, who had no luck with any of his hopeful ‘bisexual’ girls he had been courting, and we found a quiet corner and sat there, catching up and making out until Pete found me, tore my lips away from Bad-Steven mid-kiss, and dragged my butt out of there, away from Bad-Steven and my new friends.

On the ride home, Pete was upset that he hadn’t managed to attract a bisexual girl or his other hope, to convert a lesbian for the night. The only one out of the three of us that got any real ‘lip action’ or cards was… me.

You know, this night was a fun night. It was the last time I saw Bad-Steven, and I am glad I went out of my way to see him again. To this day, I still love to go to gay bars and dance. Gay bars, Lesbian bars, the patrons of these bars have no inhibitions; they accept you as you are. You can dance by yourself, with your gay friends or lesbian friends and no one gives a damn. It’s just a ‘have fun and be happy to be alive’ kind of vibe.

The only difference is that, now I just go as me: Janell, seeking a man with a plan. Not Janell pretending to be some unauthentic version of myself. 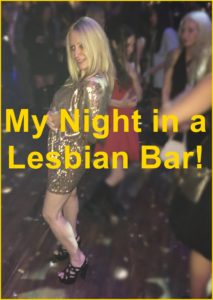 And the moral of this Lesbian Bar Story is:

P.S. Sorry if that was a let down from my teaser last week… sometimes, I just can’t help myself, I just can’t!

If you are a dog lover, please check out my book on Amazon or Barnes and Nobles – It’s called ‘Where the Dogs Go’ and here are some reviews!