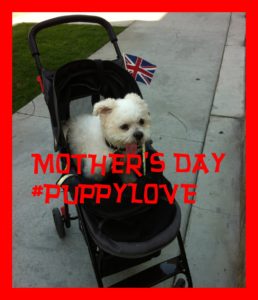 On Mother’s Day we celebrate mothers everywhere, deservingly so. I am not sure about your relationship with your mother, but I am blessed to have a fabulous mother who loves me unconditionally.  The older I get, the more I appreciate and respect everything she has and continues to do for me.  Motherhood is a lifetime commitment, and I think if you asked my mom, she would say that giving birth to me was nothing in comparison to the lifetime of worry, stress, and Janell chaos that I have and still feel the need to articulate and share with her daily.

My mom has been there for me as I struggled with my dyslexic brain, and with being bullied as a child. She has held my hand through breakups, difficult jobs, friendships gone awry –  and even from several thousands of miles away  – is still my rock, my encouragement, my strength, my voice of reason…my mother.

As it turns out, when it comes to being a wonderful mother, the apple really hasn’t fallen far from the tree. Maybe it is because of the marvelous example I have, but I can honestly say that I am one fucking amazing mother myself.

I am guessing you are wondering right now, what I am referring to, as, I blog about being ‘#SingleInTheCity’ not ‘#MommyAndMe’. And if you look at my pictures on my Twitter feed on my blog site, it doesn’t appear that….

So, as far as you know, I am not, and have never, been a mother. Well, my friends that is where you are wrong!

One day, the sweetest little boy was given to me to love, nurture, teach, train and to protect. I named him Canoli, and he was the cutest little bundle of fur I had ever laid my eyes on. I’d never had a puppy before (outside of outdoor farm dogs) so when all of a sudden this sweet little soul was thrust into my care – and relied on me for his existence in every sense of the word – my human role became a ‘24-seven 365-days’ a year job making sure that Canoli was happy, healthy, safe and loved.  He became my baby dog, and I was his human mommy, and little did I know that raising him would be the most challenging, amusing, joyful, ultimately heartbreaking, yet – best experience of my life.

When you really spend time with a dog you learn how smart, clever and loving they are. They think, they feel, they crave, they want, and their unwavering love truly makes them the best companion you could ever have.  So over the years, he taught me a lot about the kind of person I was, my capacity to love, and how much I would do to make sure that his time on this planet was the best it could be.

Being Canoli’s mommy was mostly pure joy; however as he aged – like humans – the rigors of aging, coupled with unfortunate circumstances, really tested my strength as a mother and showed me my little boy’s capacity and will to survive.  When he was 11, one night on our evening walk, an ‘off-the-leash-CHOW’ took a chomp at him and injured his neck, resulting in a slipped disc.  He was in tremendous pain, and couldn’t walk.  For months I had to carry him up and down the stairs, and it would take us an hour for him to ‘do his business’ because he could only walk short steps and then the pain would stop him.  But the Vet promised me that he would heal, and slowly, he did.   I was starting to worry that he would end up with a drug dependency problem from all of the pain medication, and I am surprised I did not end up on medication, because the healing process was agony for both of us.

Eventually, he could get around pretty well, except the injury had left his back legs weak. So when I took him out on errands with me, in no time I was carrying around a 25 pound dog, which made doing anything impossible.  Try pushing a shopping cart with a purse on one shoulder and a 25 pound dog in your arms!

So Canoli was stuck at home a lot; And it broke my heart to see his sad little face every time I ran out and he couldn’t come with me. He was used to hanging out with me whenever possible, and I knew it was killing him to be trapped at home.  So I came up with a solution.  I did something I thought I would never do. One day I went into Petco and came out with a – DOG STROLLER.

Yep, I was about to become one of those crazy LA broads that I used to make fun of. You know the girls that push their strollers down Rodeo Drive with tiny dogs dressed in pink inside the carriage? But, it was the only solution I could come up with so that I could take him a long, so he could still go to all his favorite haunts, and still be part of life.

The first time I tried to put him in the stroller he tried to bite me. The second time he scowled at me and hung his head in shame, completely disinterested throughout the entire ride, and when I tried to take him out at the half way mark so he could walk a bit, the bloody little bugger tried to bite me again.  I had almost given up, it was my third stroller attempt, and I was at Mac on Robertson Boulevard buying lip gloss.  Canoli was slumped down in the stroller, with his head hung over the side like he was drunk from too much booze the night before, when all of a sudden a mom came in pushing a stroller – a stroller that was almost identical to mine – with her little boy seated inside.

Canoli perked up, sat up in the stroller, looked over at the little boy in his stroller, and his head literally moved as he looked up and down, up and down, up and down – eyeballing the wee human sitting in the same sort of contraption that he was seated in. The little boy, oddly enough, was engaging in similar behavior, inspecting Canoli and Canoli’s stroller at the same time to the point that the sales clerks and the other customers in the store all stopped to watch these two beings observing and examining each other.  It was fascinating to watch, humorously cute, and their curious examination of each other left an entire store transfixed watching them.

After we left the store, Canoli’s attitude changed towards the stroller. I think he reasoned that if it was okay for a kid, then it was okay for him. He actually started to love that damn stroller – and he would get a little doggie erection each time I wheeled it out – as he knew it meant we were heading on an adventure, and he loved that he could go back to his favorite places.  He learned how to let me know when he wanted to get out and walk for a while, he learned how to ‘milk-it’ for attention from strangers – he adapted, and it gave him freedom and happiness for the last four years of his life.

You know, I still have the stroller.  I can’t seem to part with it, as it became such a large part of our life together.  And as I write this, my heart still aches for him, as he truly was my little baby, my little baby dog.  And all the work, and hardships that came along with caring for an elderly, injured dog were worth it, because – he was my family, he was my baby, he was the purest love I have ever known.

So you see, there are all kinds of mothers in the world. And there are so many ways to love.  And on Mother’s Day don’t forget about all of your friends and family that are celebrating the joy of being a mother, no matter who or what it is that they love and mother.  Because being a mother – loving, caring, and sacrificing your needs for another – is a beautiful gift, given from the heart, and one that should never be taken for granted, nor forgotten.

Happy Mother’s Day to all the Mother’s out there who keep the world headed in the right direction, y’all know who you are! 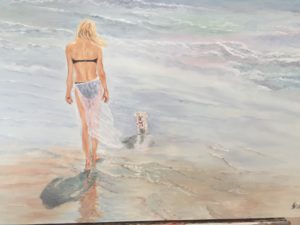 My Mother painted this beautiful painting of me and Canoli! Mother and Son portrait!

To check out my Mother’s Day Story Last year, Click on the Link Below