I KISSED A GIRL

I KISSED A GIRL! 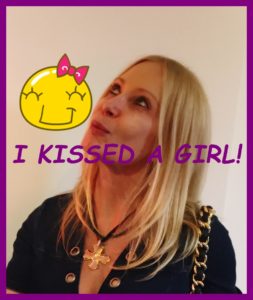 Whenever I hear Katy Perry’s song “I Kissed A Girl”, it brings back my own memories of the first time I tasted another girl’s ‘cherry chapstick’.  Now, don’t get too excited here, I am not outing myself as a lesbian, this is NOT my official ‘coming out of the closet’ blog and podcast.  Let me guess, you are now wondering if I am bisexual. I mean if the lesbian thing is off the table, then Janell must be bi, right?

Well… let me tell you my story, and then… you decide.

Flashback to a decade ago, the first time I kissed a girl!

It was the best day of the year, November 29th, that auspicious day when the —okay, maybe not the world, but my friends who love me enough to indulge me at least one day a year—my birthday.  That year I decided to celebrate ME on the roof deck of the Skybar at the Mondrian hotel on Sunset Boulevard. Sexy, right? Well, I thought so at the time.

My friends and I got to the Skybar early enough so that we were able to snag a great table in the VIP section. At this time, the Skybar was one of the hottest clubs in town. The DJs played fun music, and the patrons used their table as a home base for their drinks, dancing around the tables to the music, or on top of them. I was pretty excited that we had the best table in the house, and as the rest of my birthday posse strolled in—bearing gifts—I knew that this year’s birthday party was going to be great.

At one point in the night, one of my girlfriends and I went downstairs to use the restroom, and then we stopped to check out the bar action at the pool located on the lower level to scope out the boys down there.  The view of Los Angeles from the deck of the pool was and still is, one of the best views of the city in all of Los Angeles. I remember my girlfriend and I stood there admiring the view, taking in the beauty of the city, and I felt truly lucky to be living in this magnificent city and celebrating my special day at such a magical place.

When we headed back upstairs to my party, I saw that my friend Rick had arrived. Rick, who happens to be a trust fund baby on top of being an entrepreneur, had already ordered a bottle of Cristal Champagne and was pouring it for us all to enjoy as we walked up.  He handed me a glass, gave me a birthday kiss on the cheek, and said, “Happy Birthday Janell, let me introduce you to my date.” I saw him tapping on the shoulder of a tall thin woman, with short blonde hair, and when she turned around, he grabbed her hand and brought her over to me.  “Lisa”, he said, “This is Janell, the birthday girl, Janell this is my girlfriend Lisa.” At this point, Lisa blurted out “Happy Birthday Janell” and came over to give me a big birthday hug, which took me a bit by surprise as I had just met her. 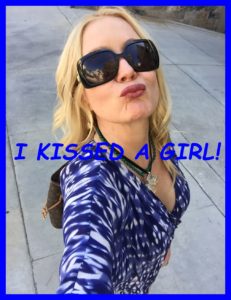 Okay, so Lisa hugged me, and then grabbed my head, pulled me in and kissed me on the lips. I remember feeling stunned. When I stood there, motionless, she went in for kiss number two, this time she stuck her tongue into my mouth, giving me first ever girl-on-girl French Kiss!  I guess, for a second, I did actually kiss her back, but truthfully the shock factor was still in full-on-force, and I was not only caught off guard but caught off balance, as I stumbled almost falling back when she pulled her tongue out of my mouth.

Holy Shit, I Kissed a Girl!

One of my friends grabbed me from behind as I started to stumble, and Lisa smiled at me and then proceeded to French Kiss Rick. I was baffled and taken aback. I stood there motionless for several seconds trying to understand what had just happened.  After Lisa and Rick finished their passionate kiss, he handed her his credit card and she went up to the bar to order more champagne. Rick came over to me and told me that Lisa was his ‘girlfriend of the moment’ and that she was actually married—to a man I will add—but that she was also bisexual and he was having fun dating her, as in his words, ‘she was crazy’.

So, a crazy girl had just kissed me!

The party continued for the rest of the night, several more bottles of champagne were ordered and I remember dancing for hours on top of the table with my girlfriends, giggling, until the bar closed at two am. That night, as I laid in bed cuddled up to my dog Canoli, I started to relive the moment of the kiss, dissecting every aspect of it from the initial hug, to the first kiss to the second kiss, obsessing over it in my mind, trying to rationalize the fact that I stood there, and allowed myself to be kissed not only once, but twice.

Holy shit, was I bisexual, I mean, I had just… had I… kissed a girl?

As I laid there fixating on the events of the evening, wondering if I was perhaps bisexual, I came to the conclusion that I really hadn’t kissed a girl, but rather a girl had kissed me. The part that was bothering me was that I didn’t hate it. I mean, I didn’t have a reaction like I wanted to throw up, or go and wash my mouth out with ACT mouthwash to disinfect me from a terrible life-altering transgression. I had just taken it in stride, laughed it off, and drank and danced the night away. But my lingering take-away from my celebration was, Lisa’s kiss.

Days of ‘I kissed a girl’ torture ensued….

So, for days, literally days, I kept reliving the kiss, wondering if on some level there was an untapped part of me that I needed to tap into. I mean, was it possible that I was attracted to women?  When I looked at the facts of my life, I had a lot of female friends, I enjoyed my female friendships, and was definitely what you could call a ‘girls’ girl’. Did this mean that perhaps I was bisexual? But then I started to think deeply about what it would actually mean to be with a woman, actually ‘going down there’ if you get my drift; and it was at this moment during my self-query investigation into my sexuality that the idea of bisexuality was instantly and immediately squelched. It was at that moment that I realized that this girl, Janell Martin, was never going to be ‘going south’ like EVER with a woman.  And as much as I love my own boobs, and think they look sexy, I definitely don’t want to play with another woman’s, nor date a guy who even has the slightest hint of man boobs.

I felt relieved, actually relieved, when I realized that I hadn’t misunderstood myself for my entire life, and that I could stick to ‘woman looking for a man’ on the dating sites, and that the kiss was just that, a kiss. An affectionate form of expression that was thrust on me by someone else who most likely just wanted to spice up my party. Spice up my party she did, and making me question myself at the same time.

Questioning yourself is healthy…

I am a very open-minded person. I have gay friends, lesbian friends, bisexual friends, and transgender friends. The melting pot of life in Hollywood opens the door to having a variety of people in your life if you so choose. And, I thrive on diversity, so I choose to have an open heart and an open soul about almost anything. But I am glad that I am intellectually and emotionally capable of questioning myself and my actions, because if I didn’t, I would never become a fully realized person. So, my takeaway for you from this story is: 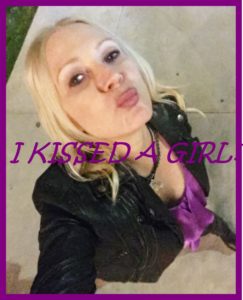 Morals of my I KISSED A GIRL story are:

That being said… next week, my story is called… My night in a Lesbian Bar…

Hmm… is the… I kissed a girl issue settled, I mean really settled? Tune in to find out!

Check out my book on Amazon or Barnes and Nobles for the dog loving crowd out there! ‘Where the Dogs Go’!