Take a SHOT Score a GOAL 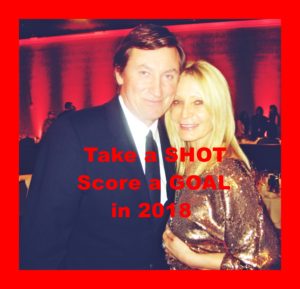 Wayne Gretzky said, “You miss 100 percent of the shots you don’t take.”

Growing up in Canada, my memories of my Saturday nights are filled with recollections of Don Cherry’s distinctive voice announcing from our living room television that it was, once again, ‘Hockey Night in Canada’. My father, along with most Canadians, was glued to our television set watching our national pastime unfold live, before our eyes, in our own living room.

As a child, I was annoyed that the one and only television set we owned was being monopolized by my father, and that the chance of watching what I deemed to be a ‘not to be missed’ made-for-TV-movie was a wish that was never ever going to be fulfilled. So, instead I would play with my toys, the hockey game background music for a little girl’s ears. Now in adulthood, Don Cherry and Ron MacLean’s voices, along with ‘he shoots, he scores’, and the sounds of the crowds going wild, have become sweet memories of my Saturday nights with my dad.

Ask anyone who grew up in Canada, or any American hockey fan, and they will know exactly what I am talking about as watching ‘Hockey Night in Canada’ was as big of a Canadian national sport as the sport of hockey itself. Of course, there were many great players over the years – Bobby Orr, Gordie Howe, Mario Lemieux – but there was none greater that the talent of Mr. 99 himself, Wayne Gretzky. Gretzky not only is the only hockey player to ever score over 200 goals in a season, he managed to recreate this remarkable feat 4 times during his career, labelling him with the title of ‘The Great One.’

So, I really love my fellow Canadian Wayne Gretzky’s quote that “you miss 100 percent of the shots you don’t take” as it is one that has personally motivated and inspired me to take my own personal shots in life.

As you may know, I myself took a big shot of my own this past year, when I published my first novel ‘Where the Dogs Go’.    Perhaps you have seen my social media posts as, little by little, I have been trying to promote my book and share my story.

When I first thought about self-publishing a novel, I almost talked myself out of it on multiple occasions. After all, I was putting my own money out there that I might never recoup; and, what if my story sucked and everyone laughed at my efforts? I mean, once something is out there, in a book form, you can’t delete it like a bad tweet or correct it like a typo in a blog post.

On top of my fears – and although some friends and family applauded my efforts – overall, there wasn’t a growing body of support around my endeavor. You know the comments people make like, ‘you will never get your money back, books don’t sell’, or I really loved (NOT) this one, ‘she should not have wasted her money on publishing a book, it would have been better spent on injectables to freshen up her face (yep, that was said).

In the end, even though it was stressful and  a lot of work, and I was fearful of the outcome, I ‘manned up’ and said FUCK IT and did it. I did it. I fucking did it! I wrote, edited and published a sweet endearing story that is truly a tribute to a little dog that I loved so much. I took a shot! I wrote a damn book! I accomplished something that not everyone has done. I put all my fears aside, and decided to believe in myself, and do something for myself and to share a story of love that I really believed will warm readers’ hearts. So really, in the end… what did I have to lose by taking a shot? I now have a book that is available world wide for everyone to enjoy.

I realize that the fear of taking a shot is not knowing what the outcome will be once you take the shot. I mean, it might result in scoring a goal and you achieve your dream, or you might miss the net and you learn what not to do the next time. Regardless of the outcome, having a multitude of experiences no matter how they turn out, will enrich you on some level and self-educate you, making you a better you.

And at the end of the day, aren’t we all in this life to be the best person WE can be?

Alfred Lord Tennyson wrote, way back in the 1800’s that “it is better to have loved and lost, then never have loved at all.” Tennyson’s quote is a reminder that life is about living, as is Gretzky’s. Both men, two hundred and more years apart, took shots at life, giving us inspiring metaphors for living life in the process. As a result, they are forever imprinted in our minds, our hearts, and have contributed to making the framework of our history.

We have just begun a fresh new year, so this year, 2018, I RESOLVE TO TAKE MORE SHOTS.

So, thank you in advance to all the people out there who love me, encourage me, and wipe my tears when things suck, because get ready… this year, I AM TAKING MORE SHOTS!!!!

How will you write the history of your year in 2018? I hope I hear 11 months from now… that you took a fucking shot.

The moral of this taking a shot story is…

Check out my book ‘Where the Dogs Go’ on my website at www.WheretheDogsGo.com  or online at Amazon or online at Barnes and Noble! Woof Hoo! 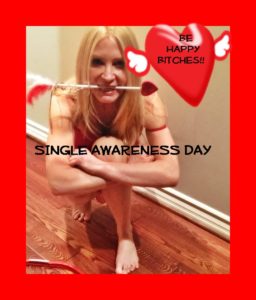 Single Awareness Day, February 15th, gives those of us who are still ‘single in the city’ our own special day to celebrate our singleness.  I guess you could call it a make-up holiday for the day that falls just before February 15th, that stupid Cupid holiday called Valentine’s Day.  February 14th, the day for lovers and love, the day when everywhere you turn, you are painfully reminded that you are still single, alone, and not in love:  restaurants, movie theaters, parks… everywhere you look, people are holding hands and celebrating love.  Meanwhile, your single-ass is hiding out at home, eating take-out, drinking copious amounts of red wine, and watching pathetic movies on the Lifetime network.

Even worse, when Valentine’s Day falls on a Saturday, which is already an unofficial date night, it is kind of like the universe is smacking single people with a double whammy dose of loneliness, resulting in universal ‘mass self-imposed pity-parties’ for one. It totally sucks being single on Valentine’s Day. TOTALLY!! But guess what?  Don’t be sad, don’t be blue, because…. Single Awareness Day is waiting just for you!

On February 15th, once the cupid madness has died down, and after all the happy couples, and more likely than not, a shitload of unhappy couples— who pretended to be happy because it was fucking Valentine’s Day and they were forced to feign love on this day— have had their special day, you get a day just for you! So, how can you rock your special Single Awareness Day and make the most of it?

If you can, take the day off work and really enjoy your day. The rest of the world left early yesterday for their ‘v-day’ celebrations, you might as well make the most of your special day, right?  And if you can’t take the day off, make sure you find a way to maneuver most of the 10 items listed below, and rock your Single Awareness Day, it’s your damn day, so make the most of it! 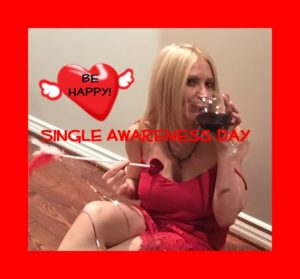 Below is an audio podcast link of the story for those who hate reading! If you like this story, please like it, share it and most importantly…laugh and love xo 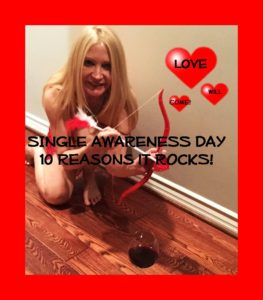