Joan Crawford – the hellish nightmare of a mother exposed by her daughter when she penned the book ‘Mommie  Dearest’  – later became a movie that forever changed her well-honed public persona;  and as a teen – scared the crap out of me.    Growing up, the only mother reference I had was my own, and it wasn’t until I became an adult that I began to learn and appreciate exactly who my mother is.  As adults we eventually discover whether we hail from a family that is functional, dysfunctional or non- functional; how many people in jail end up blaming their parents as a result of this dysfunction?  You don’t hear killers say they killed because they had a great amazing childhood???

Los Angeles, in and of itself, is a city that attracts people who want to become rich, famous, or even infamous; this ‘crazy law of attraction’ brings dysfunctional people here in droves; how often do you read about an actor-singer-writer-director who credits their childhood pain for their brilliance? Hate it or love it, it’s hard to shake the foundation on which you were built, and luckily for me, I came from a supportive and loving one. Not surprisingly, living in Los Angeles, over fifty percent of my girlfriends did not have as much of a “Norman Rockwell’ childhood as mine; and most of them have major issues with their mothers.  Ironically, according to some of my friends, me coming from a functional family makes me a dysfunctional girl in the city….Dysfunction -ally kind; Dysfunction-ally friendly, and Dysfunction-ally forgiving…… DYSTUNCTION-ALLY ME!

So on this Mother’s Day weekend….My Mom’s story….

Told to me after I called her, tears rolling down my face, having had whom I thought might be Mr. Right, send some lame ass text as to why he couldn’t see me last minute…

She met him at a dance.  He jumped down in front of the band close to the stage where she was dancing, grabbed her and said ‘You are the girl for me.’ Luckily this didn’t backfire and scare her away, and a movie date was set up for the following Saturday night.  She, excited for the night, primped and preened like all girls do when getting ready for a date, a date we girls secretly hope will end up being THE DATE.   He, working hard on his father’s farm, came in early from the fields to take a nap imploring his mother to wake him up in time to get ready for the date, which he also hoped would be THE DATE.

She was ready on time and by 6:50 pm was seated in front of the nursing dormitory, excited for the night ahead, ready for her 7:00 pm date.  She waited, she waited, the cement bench not exactly comfortable, and as the warm autumn sun now long gone became cool air, she still patiently sat and waited. At 9:30 pm she decided he wasn’t showing up and went inside.  (LA GIRLS WOULD HAVE LASTED 15 MINUTES MAX LOL)

He woke up at ten pm – his mother having taken it upon herself to let him rest as a date was not on her priority of things for her son to do – and he realized he had missed his date.  The only way to contact her was on the nursing residence phone, which was only available during the week days from nine to five.

And then my mom said, you know Janell, sometimes you have to give people a second chance in life, if I hadn’t given your father a second chance and went out with him again….you wouldn’t be here right now…

So this is who made me, this is the stuff of where I came from, and here is how I survive living in a dysfunctional city, which make my functionally  dysfunctional…..go figure. 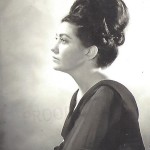 My Mommie Dearest is the dearest!

So I am happy that I had a  mother that has made me dysfunctional in the city, because if I hadn’t  I wouldn’t have the wonderful, eclectic group of supportive friends that surround me.

Happy Mother’s Day Mom…Every day I feel blessed to have a Mother like you! xo