PERCEPTION WARPED! : How Living in Los Angeles has  Warped my PERCEPTION! 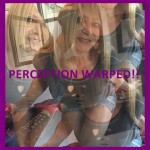 PERCEPTION….PERCEPTION is influenced by who, what, how and where you live.  Living in Los Angeles has definitely changed my PERCEPTION of life in general.  Let’s just say that things that would have seemed ridiculous, outlandish, and downright fabricated – were I still living on the Canadian Prairies –  have become my new ‘happy’ normal.

The other day I was feeling a bit down, and decided to cheer myself up and take a walk on Robertson Boulevard to get some fresh air and see if any of the marvelous shops located there had any great sales.

I love fashion, but this fashionista is on a budget, so when I see some ‘fabulous- must-have-designer-designed’ WHATEVER  on sale –  and now in my price range –   it equates in my mind to…..’Happiness in a Bag Syndrome’.

‘Happiness in a Bag Syndrome’ is that feeling you get when a sparkly new item is neatly folded between soft tissue paper, and carefully put in a labelled bag, that you now get to carry around and fantasize about how great that WHATEVER will look on you.  It’s the same feeling you get from great wine, great chocolate, great sex or a great laugh….Although this instant happiness actually lasts longer as it is tangible and therefore in my mind makes it a an even greater source of happiness as the wear-ability definitely outlasts the wine buzz, the chocolate taste, the hopefully great orgasm, and the belly laugh – this happiness has some staying power.’

So on this day, when I found this amazing Kooples designer t-shirt at fifty percent off, I snatched it up and finished my walk with a smile on my face and a bounce in my step.  Oh course, once I got home, I couldn’t wait to try it on and see how it fit into my wardrobe, feeling happy and proud of myself for finding this amazing deal.

I am not sure why, but as I was trying it on and marveling how cute and down-right sexy my new wardrobe addition was, it dawned on me that I had just spend $82.50 on a …..t-shirt.  Somehow the whole, wow, I am getting this half price – yep the t-shirt was originally $165 –  had clouded my sale-happy-self’s brain.   When I looked at my plain, grey, slightly oversized t-shirt with four small holes in the front – slashed to look like someone took a pair of scissors and cut out chunks – I  realized a sane person would question my sanity if I told them about my  amazing deal.   I had PAID $82.50 for….a t-shirt. 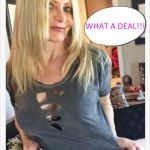 This is when it hit me that living in LA, things are so expensive that my PERCEPTION  of the price of goods has  become officially WARPED. Then I started to think….hmmm….I wonder what else that happens in my everyday life, where my PERCEPTION of my ‘Canadian normal’ has done a 180….and for the most part goes ‘un-remarked and unchecked’ in my brain.

Upon reflection…. here are some of my WARPED PERCEPTIONS after living in LA:

My PERCEPTION of Fashion….

My PERCEPTION of Going Out………

And lastly…..My PERCEPTION of Weather….

My PERCEPTION of life is officially Cali WARPED!Thank you LA LA Land! 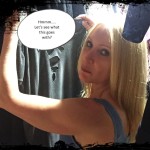 http://www.thekooples.com/fr/  Kooples….great stuff by the way, hit the translate button into English when you click on the link (if you don’t parlez le francais!)